Combining Proprioceptive Specific Core Strengthening With The Benefits Of Decompression

With our sequential proprioceptive specific Muscle Pattern Re-Organization approach you will be able to give your clients the most advanced and comprehensive spinal treatment and core strengthening in our field today.

Review proper patient set up and proper use of the decompression strap prior to initiating exercises with your patients.

Brian Magna a Total Spinal Fitness Clinical Affiliate and owner of Magna Physical Therapy in Avon Connecticut added this valuable exercise to our routines.   We now use this regularly to initiate our protocol and this maneuver works great as a cool down following an aggressive routine. 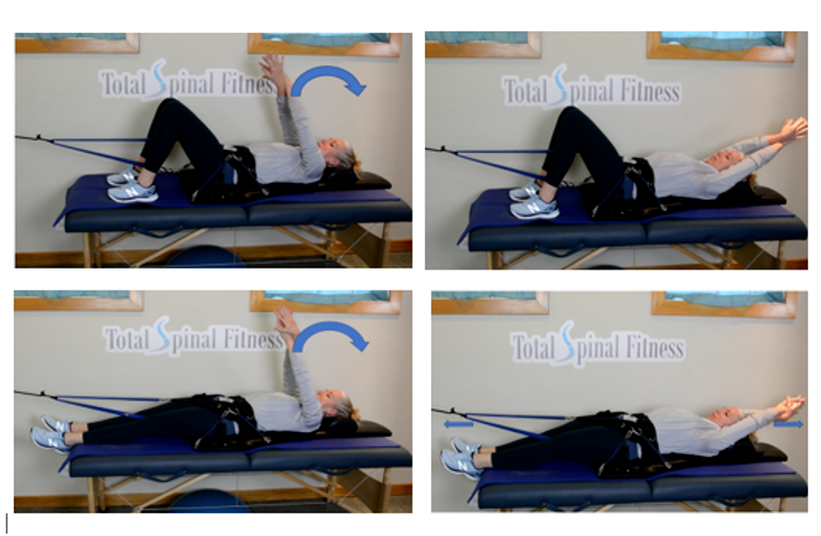 (See the disc protocol below and see how we specifically incorporate these movement patterns when treating injured discs.)

This exercise will restore segmental side bending initiating deep core Intertransversarii.  The resistance straps provide the proprioceptive feedback to ensure your clients are performing the movements correctly.
Hula Video

(See the disc protocol below and see how we specifically incorporate these movement patterns when treating injured discs.) ​
Tail Bone Raise Video

The Clinical Significance of Restoring Lumbo-Pelvic Rotational Synergy.
1.  Re-establishing and optimizing the mechanics of the gait cycle.

This exercise is a very powerful and important exercise as this movement pattern re-establishes the functional rotational movements associated with the oblique axis's of the sacrum.  Our lumbar spine was designed to move segmentally in synergy with the sacrum and pelvis.  We utilized the most functional movement of the lumbo-pelvic region and re-pattern, or re-establish, the natural biomechanics that occur during the gait cycle. This is the only system that provides resisted unilateral isolated Multifidus strengthening. With the use of the proprio-pads and resistance bands your clients will get the proprioceptive feedback to isolate these muscles.  This exercise is initiated with isolated unilateral Multifidus strengthening and progressed through Muscle Pattern Re-Organization restoring the synergy of the Oblique's and TA with the deep core while performing functional rotation/de-rotation of the pelvis.

2.  Reducing the loads on the lumbar discs.

Clinical studies reveal that a rhythm with high pelvic rotation and low lumbar flexion involved more global muscles and increases the role of the disc in resisting spinal loads while its counterpart, with low pelvic rotation, recruits more local muscles and engages the ligaments to lower the disc loads.  On the other hand, restoring a normal rhythm that has balanced pelvic and lumbar rotations yields almost equal disc and ligament load-sharing and results in more balanced synergy between global and local muscles. This demonstrates that the spinal response during movements that involve loading the discs is highly dependent on the lumbo-pelvic rhythm.


Our system is the only system in our field today that allows for isolated resisted strengthening of the Multifidus in a position of decompression. The literature is filled with research on the importance of this deep core stability.  Here are just a few.

(See the disc protocol below and see how we specifically incorporate these movement patterns when treating injured discs.) ​ 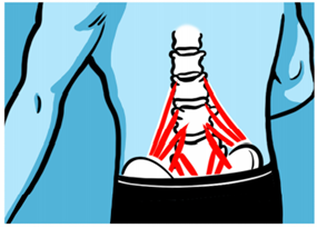 
​The oblique orientation of the Multifidus muscles provide deep core stability as they act as cross struts.  Without this segmental cross strut stabilization we will not have true core stability.

​I use the analogy of a bridge fabricated from metal beams.  Without the cross struts the bridge would collapse when any stress placed on it.  When it comes to the importance of the Multifidus in stabilizing the spine this is a perfect example of their structural importance. 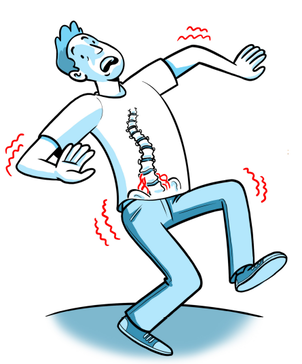 ​Strengthening the Erector Spinae and Rectus Femoris and the other outer core muscles without the structural support of active Multifidus muscles would be like building a bridge without cross struts. Although the TA and Oblique's can also act as cross struts for the trunk they have no direct control over the segmental stability therefore do not help restore optimal spinal biomechanics leading to continued dysfunction. ​
​

We do the Sexy Muscles Second!

The Bridging exercise has always been a powerful, safe, and effective exercise for the outer core.  By utilizing our decompression strap and core resistance bands this exercise becomes even more effective.

Single Leg Bridging initiates unilateral single leg support in a safe position of decompression and with the use of the resistance bands will  help restore the synergy of the intermediate core musculature.  Progressing this to a version of exercise #6 under sports specific training will  challenge the intermediate core to stabilize the spine in a very functional single leg support position, restoring synergy between the Psoas, QL, and Gluteus Medius.

Initiating synergy between the deep core and outer core musculature

​The following exercises are examples of advanced core strengthening and sports specific training.

1.  Unloading decreases pain improving proprioceptive input from the involved musculature leading to optimal strength gains.
​See the case study below and watch a video of an actual patient with disc pathology get great results with our system.   ​

Case Story:
This patient was suffering from back pain associated with congenital Schmorl's nodes. This is a great example of how our system demonstrated results in facilitating improved disc health after all other conventional physical therapy approaches failed.

​Scoliosis Protocol/Take the Torsion Out!

Scoliosis in not just a lateral curve of the spine. There is a three dimensional biomechanical component to scoliosis that must be addressed.  The spine twists and torsions which can be seen in the rib hump.  This torsion creates increased nerve tension further exacerbating the scoliosis and pain.  We have a simple technique to reduce the torsion while exercising our scoliosis patients.  This technique has proven to benefit our patients with scoliosis.

This video does not show some of the nerve gliding and nerve flossing techniques that we perform when the torsion is eliminated but we wanted to share that performing nerve glides after we de-torsion the spine has also demonstrated good results.

This deep core stabilization/disc protocol gently re establishes segmental movement while protecting the injured disc. Conventional spinal stabilization focuses on the TA and the Oblique's in order to promote the corset affect.  This corset affect will help to stabilize the lumbar spine through a conscious effort to hinge from the hips and maintain a co-contraction between these outer corset muscles and the paraspinals.  But our true stability must take place at the segmental level.  This protocol re-establishes motor control of the Multifidus first in order to truly control and protect the disc injuries. Through a series of gentle movements followed initially by isometric contractions of the Multifidus.   This protocol will re-establish proper motor control of the deep core muscles.  We then progress to dynamic segmental movements to re-establish the synergy of the TA and the Oblique's to work together with these deep core muscles.